Welcome to the Isle of Bute Pool League Players
information pages, navigate at your leisure.
Become a member by clicking on 'Join here' in the
navigation bar, this will allow full access to all the
pages on the site.

Notice is hereby given that the Isle of Bute Pool League

will take place in the

at this meeting in order to ensure the league starts on

PLEASE NOTE NAMES AND FEES FOR BOTH OF THESE COMPETITIONS NEED TO BE SUBMITTED NO LATER THAN FRIDAY 1st JULY.

THIS IS THE SAME DAY AS THIS YEARS PRIZE GIVING TO BE HELD AT GAMBA'S BAR, I WILL TAKE NAMES AND FEES THERE.

WITH ENOUGH ENTRIES THERE WILL BE LOCAL QUALIFIERS

SEE BELOW FOR COMPETITION DETAILS

will be held in

Sponsors of the league

Presentations and prizes will be made for all winners and runners up of the League, the Shield competition, Champion of Champions Cup, League individual, Ladies and Under 21’s individual the Open singles and Open doubles winners, runners up and semi-finalist’s plus a special award for the team finishing bottom of the league

Gamba’s Bar for the League

Golfers bar for the Shield competition

Stephen Thomas and Optimize for the Champion of Champion’s Cup

Galatea bar for the Open singles and doubles competitions

Phil of Picture Bute for supplying the trophies

Names along with entry fees should have been submitted by

If you have submitted your name but not the entry fee you will not be included in the draw unless you bring your entry prior to the draw taking place at the meeting but no later than.......

8:40pm in the Galatea bar on Monday 25th January

Names entered for the SPA Individual Membership 2016 events are:- 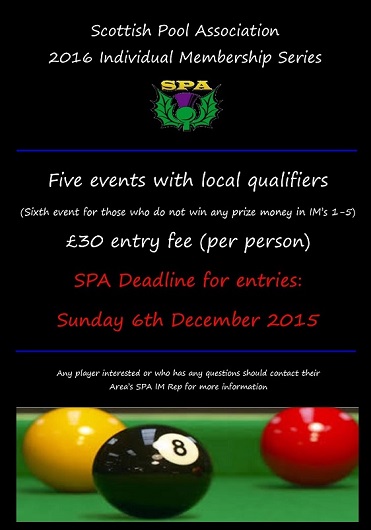 Names and entry fees must be submitted to your representative by

Please follow the link HERE to view the Pre-lim outcome and HERE for the First round draw.

The IoBPL gets underway this Thursday 29th October at 8:30pm.

I am delighted to welcome all the team entries this year, with a special welcome extended to the Grapes Bar who return to the league after an absence of many years. I really hope they do well on their return.

The AGM was well attended with approximately a quarter to a third of all league players their and also some new faces.

The committe elect are:

As you can gather their was some reluctance from those in attendance to stand for any of the executive posts.

There are ten teams entered into the 2015-2016 league as follows: The Galatea, Golfers and Struan have each entered two teams with the Grapes, Gamba’s, Golf Club and Kingarth having entered one team each.

The first league matches will start on Thursday 29th October. League fixtures and score sheets will be distributed around the venues before then.

Ties for Thursday 29th October: Click HERE to view all the fixtures

The IoBPL committee and members would like to thank Paul Tweedley of Gamba’s bar for renewing sponsorship of the league, Tommy Walmsley of the Golfers bar for the Shield competition, Stephen Thomas and Alex Lawrie of Optimize Financial Solutions for the Champion of Champions Cup and Robert Galley of the Galatea bar for the Open singles and doubles sponsorship.

A vigorous debate took place over a proposal to remove the doubles from the current league match format and replace it with a singles only format. Eventually a vote took place and the singles format proposal was carried by 9 to 7. Further discussion over the number of singles to play with the new format and how the points would be awarded now that a draw was possible took place. It was agreed to play 12 singles for this season to be discussed further at the next AGM. Points will be two for a win and one each for a draw situation.

However with regard to the Shield and the Champion of Champions Cup the doubles will remain in place, but another proposal to remove scotch doubles and revert to the standard doubles format was carried 9 votes to 3; all other rules remain in place.

The ‘one off’ team registration has been increased to £12 per team to offset a reduced league sponsorship deal. This should be collected by team captains and forwarded to the pool league treasurer no later than the second week of the commencement of the league.

It was also agreed by those present that a courtesy table familiarisation, timed strictly between 8pm and 8:15pm, be extended to the visiting team, with the home team back on the table at the end of this time, up to match commencement at 8:30pm. If visiting team players are not present during the allotted time they will forfeit this courtesy.

New poster size sets of laminated Blackball Pool Rules have been purchased and each establishment entered into the league will receive a set in due course, along with copies of the updated constitution and team captain guidelines.

Please note: - Completed score sheets are now to be handed into Gamba’s bar no later than three days after a match, in any case by midnight at the latest on the following Sunday.

SPA affiliation: The IoBPL will re-affiliate to the SPA for the 2016 season. This allows any IoBPL area player who would like to join the SPA’s individual membership (IM) for the 2016 season to play in each of the 6 qualifiers leading up to the National finals and gain merit and or ranking points on the National ranking table. Entry is at a cost of £30 for the qualifiers which are held throughout the year.

Contact Mike McHardy your SPA representative if you would like to join the 2016 IM series with your name and £30 entry by, but no later than Friday 27th November.

The AGM with take place on

It is envisaged that entry fees will remain the same as last season.

IN THE GALATEA BAR @ 7pm EACH NIGHT

FREE TABLE AND PIZZA COURTESY OF THE GALATEA

MATCH FORMAT TO BE DECIDED ON THE NIGHT

THERE WILL BE A SMALL WAGER - WINNING TEAM TAKES ALL

* PLEASE NOTE THE DATE CHANGE FOR BOTH COMPETITIONS *

Venue: - Finals will be held at the Dumbuck Hotel Dumbarton

Details: - There will be local qualifiers only if there are *sufficient entry numbers* from the IoBPL area; otherwise entrants will need to travel to an adjoining area (normally Central Ayrshire) to play their qualifiers.

Singles entries:- The pro-rata has now been calculated and the Isle of Bute area have one qualifying place to play for; The area draws will be published soon and will be available to view when this is done by following the link below.

will be held in

Presentations and prizes will be made for all winners and runners up of the League, the Shield competition, Champion of Champions Cup, League individual, Ladies and Under 21’s individual the Open singles and Open doubles winners, runners up and semi-finalist’s plus a special award for the team finishing bottom of the league

Come along to the presentation and show your support and appreciation for all this season’s sponsor’s – Gamba’s Bar for the League, Golfers bar for the Shield competition, Stephen Thomas and Optimize for the Champion of Champion’s Cup, the Galatea bar for the Open singles and doubles competitions and Phil of Picture Bute for supplying the trophies along with an additional trophy to the league.

On behalf of the Isle of Bute Pool League committee and members.

We wish Richard 'Reido' Reid all the very best of luck attending his debut Individual Membership competition this weekend at Pockets Paisley.

The SPA Seniors (over 40's) tour gets underway on Saturday 4th April.

Ok we have a team together for this tournament :

There is obviously some interest in this competition from the Isle of Bute players, but to be quite frank with you if you don't commit to this by putting your name forward very very soon we will miss out once again.

If you have a genuine interest; add you name in the comments above and we will formulate an Isle of Bute team or two.

The competition is limited to 48 teams with preference going to the 32 teams entered last year, up until 31st December, after that it is on a first come first served basis.

If we get our team entered and the entry paid before then we will be added to the list in order. Hopefully within the 48 team limit.

Please read through the new international selection process that the Scottish Pool Association will be using to select teams to represent Scotland at International events.

The first event to use this process will be the European Championships as indicated below.

Anyone interested in being considered should ensure they are available on the date of the event and are fully familiar with the process before putting their name forward. You will find a link to the full process below and also a link to the European Blackball Association website with information on the European championships.

Entering your name is no guarantee you will be selected or be invited to trial for a particular team.

Please take a moment to read and familiarise yourself with the International Selection Process before committing your name forward.

If you can make the event dates noted above, and would like to put your name forward for International selection in any of the teams, then please post your name on this forum, stating which team you would like to be considered for (and if more than one) then please list your order of preference.

Please Note: you can't select B1 or B2 as your choice, it must be 'B team', and the B1 manager will have first choice of players.

The team managers for each section will be in touch with you if selected for the team or via trial.

The closing date for player nominations is 31st December 2014 to enable the managers to select and run trials mid to late January 2015.

There will be no exceptions to late nominations.

Please take a moment to read and familiarise yourself with the International Selection Process before committing your name forward.